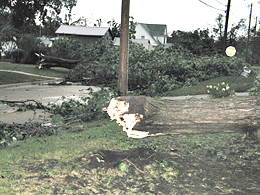 The President has approved a disaster declaration, freeing up federal recovery money for six Iowa counties.

He says the first was the windstorm that went through Benton, Marshall Story and Tama counties, and the second was the flash flooding in Clay and Dickinson counties. The declaration provides help for public infrastructure repair and the costs of disaster recovery.

Benson says the preliminary damage assessments for the six counties were $10.8 million. He says that was a quick look, and the figure could change as they do a more detailed look at the actual cost of repairs. The wind storm damaged hundreds of trees, and Benson says one of the things the federal money will help pay for, is the cost to clean them up.

He says that’s a typical cost you see with wind storms or tornadoes as the trees have to be cleaned up for public safety reasons, and the disaster money will help cities and counties recover the cost of removing the debris. Many of the trees were either destroyed or damaged so badly they had to be cut down. Benson says the cities and counties may be able to get money from disaster funds to replace the trees that were on public property.

This designation does not cover any damage to private homes and businesses. Benson says there was not enough damage to businesses and homes to qualify for individual assistance. He says insurance often covers the private costs from the damage, so there is not much for the federal program to pay for. Benson says the designation allows them to move ahead and start getting more detailed figures on the damage.