You are here: Home / Sports / Iowa coach pleased with preparation 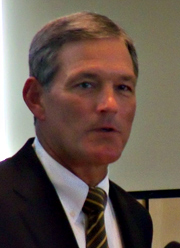 Iowa coach Kirk Ferentz says every year an FCS team stuns an opponent from a BCS conference and he doesn’t want his Iowa Hawkeyes to be the next victim when they host Tennessee Tech in their season opener on Saturday.

The Golden Eagles are a member of the Ohio Valley Conference and it was last season when Jacksonville State out of the O-V-C pulled off a stunning upset at Ole’ Miss.

Ferentz says they just escaped in a game in 2009 against U.N.I. and ended up in the Orange Bowl, so they know they will have to be at their best on Saturday. Ferentz says the Hawks are ready for a game with a good attitude and health and now they need a good game week.

Ferentz says between six and nine true freshman will get on the field in the opener. He says the runningback position is where they are the thinnest and the young players will see the most time.

Ferentz believes the Hawkeyes will be better in special teams this season. He says all three of the place kickers are doing a pretty good job this fall. Ferentz says James Vandenberg is ready to take over as the starting quarterback. He says Vandenberg has a way about him that exudes confidence and that carries over to teammates.

Ferentz says Vandenberg will likely have some ups and downs like any player, but he says in the long run he expects him to perform well.

There will several new faces on the defensive line and Ferentz says they may be rotating several players on that unit. He expects that to continue all year long.