Alcoa is expanding its plant in Davenport as demand for its aluminum automotive products are expected to double by the end of 2013.

“Aluminum can play a significant role in terms of lightweighting,” Fox explained. “That lightweighting allows for a smaller powertrain, better mileage and less CO2 output.”

The Iowa Economic Development Board voted today to award Alcoa an incentive package that includes $3 million in direct financial assistance.

Fox says the offer from the state cemented Alcoa’s plans to grow in Davenport. The expansion is expected to cost $300 million, create 150 jobs and retain 200 jobs that would’ve been lost, according to Fox.

“We hope this is just the first phase of what can be a very dynamic growth period for us in the automotive area,” Fox said. He spoke at a press conference in the Governor’s office. Governor Terry Branstad said he’s not only pleased with the new jobs, but also the environmental benefits. 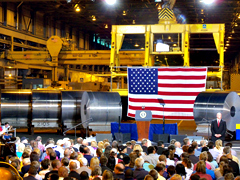 Workers waiting in the Alcoa plant for President Obama's visit in June.

“By making these lighter weight vehicles that emit less and get better mileage we’re really helping the environment” Branstad said. “This is something that’s very positive and I think the (Department of Natural Resources) will its benefit as well.” Alcoa currently employs 2,200 workers at its plant in Davenport.

Fox said Alcoa consider other options than expanding in Davenport as they have facilities in a number of states, but he says his preference was to be in Iowa to do work that they are experienced in.