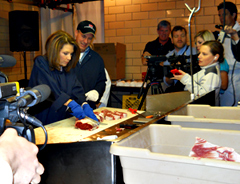 Republican presidential candidate Michele Bachmann visited a meat locker in Des Moines today, walking through a room full of hanging carcasses and then going into the cutting room where the meat is sliced into steaks, ribs and other cuts of meat or ground into hamburger.

Bachmann put on some heavy blue gloves and cut into some of the raw meat herself as news photographers captured the scene.

The visit was part of the Bachmann campaign’s focus on repeatedly stressing the candidate’s family roots in Iowa.

“My grandfather owned a meat market in Iowa years and years ago and it’s great to be able to come back and see what has made this state so great,” Bachmann said. 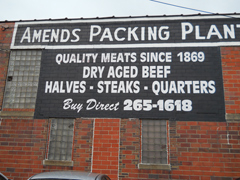 Bachmann suggested the Amends Packing Company was hamstrung by onerous U.S.D.A. inspection standards for the meat as well as other government regulations.

“In a company that has five or six employees, one employee is dedicated to just to deal with government rules and government regulations,” she told reporters.

Bachmann held a brief news conference in the meat locker’s cutting room. Bachmann was asked which regulations are “especially burdensome” and she responded by criticizing the tax proposal President Obama unveiled Monday.

“When businesses have to deal with the overwhelming regulatory burden, like this business has to deal with, then you add on to that the tax burden that President Obama wants to put on a business like this, because at this level, at lot of businesses run their taxes through an individual tax return,” Bachmann said, ” …when that happens that tax burden goes up, you wipe out the margin of profit and the business just can’t go on anymore.”

Bachmann did not cite any specific regulations she would undo as president, but the company’s owners complained of the multiple inspections required for the meat they process.

This morning’s visit to the meat locker wrapped up Bachmann’s two-day campaign trip to Iowa. She held public events at businesses in Sheffield and Waterloo yesterday.