You are here: Home / Business / Latham blames Democrats for stalemate over spending bill 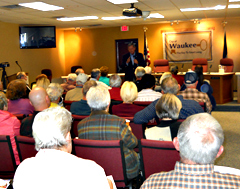 Congressman Tom Latham speaks at a forum in Waukee.

The federal government runs out of money at midnight on September 30th and Republican Congressman Tom Latham blames Democrats for this latest stalemate over government spending.

“The people in the Democrat leadership are saying that,’We can get a partisan advantage by having a government shut-down,'” Latham says.

The Republican-led U.S. House has passed legislation that would keep the federal government running through mid-November and provide additional money for federal disaster relief.

Latham says he won’t support any package that doesn’t have some cuts to correspond with the increased spending. “I’m very hopeful at least that they will in the end decide to pick up the House bill, pass it as it is. This just funds the government through November 18. This is not a long-term situation. Let’s get this done now. Get the money to FEMA to help people who have disasters…there’s an immediate need to get disaster relief out now.”

Latham spoke with reporters after holding a town hall meeting in Waukee this afternoon.