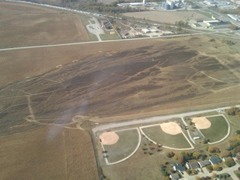 Three juveniles are charged with multiple counts of arson after a field fire in Mason City.

The city’s police and fire departments responded shortly after 10 o’clock Thursday morning, with multiple fires breaking out in areas on the city’s southwest side.

There weren’t any farmers doing harvest work at the time of the fires. Three subjects were observed running into a field adjacent to one of the fires.