A community of campers plans to settle on the statehouse grounds tonight, part of the “Occupy Wall Street” movement, but the area is subject to an 11 p.m. curfew according to capitol police. 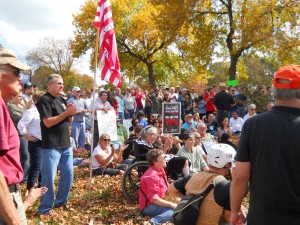 Several hundred people gathered at noon today for an outdoor “General Assembly” in the grassy park that sits to the west of the state capitol building.  Because they didn’t have a bull-horn, speakers were heard because they spoke in phrases, and the people around them repeated their words. 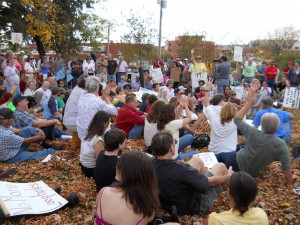 Over an hour later, the group voted to set up an “Occupy Des Moines” camp on the statehouse grounds.  Their next order of business was how to safely “do their business.”

“I think that the issue of bathroom facilities is of the utmost importance because of the cops, again,” a woman said, referencing the Des Moines Police squad cars that were in a nearby parking lot. “I don’t want anyone getting arrested for indecent exposure.” 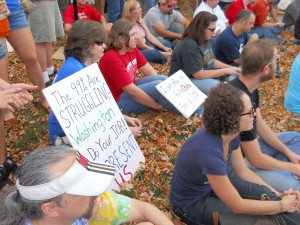 There was a mix of young and old at the gathering. One older man asked the group to sing a John Lennon song if they decided later to march on the streets of Des Moines. Another woman made this offer to those who intend to “occupy” Des Moines: “Some of us are too old to camp, but we can casseroles.” Her offer was met with wild cheers and applause.

Many held hand-made posters. Riebana Sachs of Urbandale drew pink pigs on her poster and gave the pigs names like Citigroup and JP Morgan Chase.

“I want people to stand up and protest this greed,” Sachs saif. “…They control the stock market and all of our money, basically pulled out of our pockets and it’s going to their bonuses and tax breaks and their pleasure.”

The “Occupy Wall Street” movement has been fueled by tweets on Twitter and posts on Facebook. Clark Davidson of Des Moines started setting up a tent on the statehouse grounds at about 1:30 this afternoon.

“We’re going to be running a 24-hour livestream out of this tent, so anybody can come up and say what they have to say to the community at large,” Davidson said.

The livestream is online at www.dmlive.tv.

According to a state trooper who is on duty this afternoon, there is an 11 p.m. curfew for the park where the “Occupy Des Moines” group intends to set up their occupation.  It’s unclear what may happen if tents pitched in the area this evening.