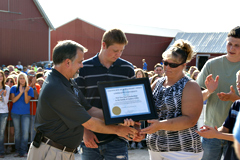 Upper Iowa University President Alan G. Walker (left) presents a certificate for up to five, two-year scholarships to Audrey Gibbs and her family .

Hundreds of people turned out Sunday to watch as a rural West Union family return from their vacation to see the new home built for them by volunteers and the crew from the TV show “Extreme Makeover Home Edition.”

Audrey Gibbs lost her husband several years ago and is raising her six children. Gibbs is legally blind after suffering an aneurysm. Relative Debbie Honn says Gibbs has never given up.

Honn says Gibbs is a fighter who has never stopped. Show producers are not releasing many details of what’s included in the new home until the show airs. The air date on A.B.C. has not yet been set. Honn says it’s wonderful what the volunteers and the show have done for the family in just seven days.

“I just want to thank everyone for the whole family from the bottom of our hearts,” Honn said. The Extreme Makeover show held fundraisers for the family all week and they announced they were able to pay off the family’s mortgage through the local donations as well as award five of the kids scholarships from Upper Iowa University and Northeast Iowa Community College.