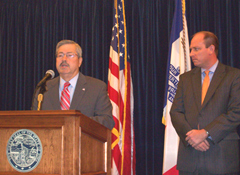 Iowa’s Republican governor, the state’s GOP leadership and the chairwoman of the Iowa Democratic Party are denouncing an effort to have presidential elections decided by the popular vote.

Governor Terry Branstad says it would strip Iowa of its influence in the November presidential elections.

“The National Popular Vote will encourage candidates to look past smaller, less-populated states like Iowa and focus, instead, on cities with major media outlets,” Branstad says.

The National Popular Vote initiative is running television and radio ads in Iowa, with a message that the candidate who gets the most votes should win. The Iowa Republican Party’s state central committee on Monday night passed a resolution making clear the party’s leaders are opposed to the idea.

“This is an illogical, ill-advised scheme that must be stopped dead in its tracks because the National Popular Vote movement would render Iowa irrelevant in future presidential contests because it strikes at the heart of our nature as a battleground state,” says Matt Strawn, chairman of the Republican Party of Iowa.

Iowa has been a toss-up state in presidential elections over the past decade and the nominees from both political parties have spent time and resources campaigning here to try to win the state’s electoral votes, part of the candidates’ efforts to accumulate enough votes to win the Electoral College. Almost a dozen states have signed a compact, pledging their votes in the electoral college will be cast for the candidate who wins the national vote tally, even if that candidate didn’t win a majority of votes in their state.

Strawn says no nominee for president would pay attention to Iowa in the general election if the effort succeeds.

“Quite frankly, we need to drive a stake through the heart of teh National Popular Vote compact, because it would render Iowa irrelevant,” Strawn says.

“This system would give candidates a free-ride in the general election and allow them to focus their attention on population centers that cannot speak for the rest of the nation,” Dvorsky said in a written statement emailed to Radio Iowa.

Branstad’s predecessor, former Democratic Governor Chet Culver, has been working for the National Popular Vote campaign. Republican Craig Schoenfeld, the head of an Iowa group which urged Texas Governor Rick Perry to run for president and one of the staffers who quit Newt Gingrich’s 2012 campaign, has worked as a statehouse lobbyist for the National Popular Vote initiative.

“I can’t speak for why these people are doing what they’re doing,” Branstad says. “I can just say that…I think this would be bad for the country as a whole. It goes against, you know, what the founders of our nation had in mind when they set up the system that we have.”

The National Popular Vote project’s main benefactor and chief spokesman was in Iowa last week, promoting the prospect that the presidential candidate who gets the most votes should win. That hasn’t happened four times in American history, most recently in the 2000 election. Al Gore won the popular vote, but George W. Bush won the right combination of states to win the Electoral College vote and, therefore, win the presidency.

(This story was updated at 10:50 a.m. with additional information)