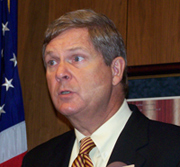 U.S. Ag Secretary Tom Vilsack says the 2012 Farm Bill will be “structured” by what the so-called “super committee” in congress decides.

The panel was created as part of this summer’s debt limit deal and the “super committee” is to come up with a series of select cuts in order to avoid an across-the-board cut in the federal budget.

“I think that committee is basically going to create two things. It’s going to create the fiscal parameters in which the bill will be structured and it will also create a need for an accelerated time-table to get it done,” Vilsack says. “…I’ve laid out some priorities of things I think folks ought to be considering.”

Making sure the safety net for farmers is “strong” is among Vilsack’s priorities, along with continued federal funding for rural development and conservation efforts.

“Forgive me if I refer to it as The Farm, Food and Jobs Bill,” Vilsack says, “because I think when you just discuss it as a Farm Bill you really don’t do service to it.” The legislation includes funding for the federal food stamp program as well and Vilsack says every dollar spent on food stamps has a ripple effect of another $1.84 on the economy.

Some Republicans complain too much is being spent on federal food assistance. Other Republicans argue for the total elimination of farm subsidies. Vilsack doesn’t expect significant change in crop subsidies, however.

“I think there are ways that we can be creative about the design of the program to be more effective and still actually cost less money. I mean, obviously, the direct payment issue was one that I think people are concerned about, so we do have to recognize we’re speaking to the 98% of America that doesn’t farm and we’ve got to be able to justify what we do to that 98 percent,” Vilsack says. “I think that they will understand a revenue program that also has disaster assistance to it.”

According to Vilsack, you’d have to go back nearly two decades to find a time when farm payments were a low percentage of the federal budget. “You could do away with all that and you’re not going to solve the fiscal problems of the country based on farm programs,” Vilsack says.

“I think there’s a lack of full understanding of precisely how much support there is or isn’t in those farm programs.” Vilsack made his comments this morning during taping of an Iowa Public Television program that will air November 4th.