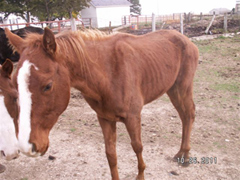 This horse was seized in a Fayette County animal neglect case.

Several horses have been removed from properties in northeast and west-central Iowa as authorities investigate separate cases of animal neglect.

Sheriff Marty Fisher says 14 horses were found and 8 were transported elsewhere for treatment.

“The horses at these locations suffered from different levels of neglect,” Fisher said. “In some cases, they did not have enough food.” Sixty-two-year-old Larry F. Woods is charged with two counts of animal neglect and two counts of duty to dispose of deceased animal bodies.

Fisher said two diseased horse bodies were not disposed of properly. Woods has served as a magistrate in Fayette County since 1992. In another case, the Animal Rescue League of Iowa reports it helped officials remove 18 sick and neglected horses from a property in Guthrie County.

A press release indicates the horses had been living without food, shelter and veterinary care for an undetermined amount of time. There’s no word of any charges in that case.