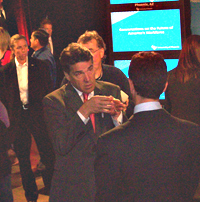 Republican presidential candidate Rick Perry used an afternoon appearance in Des Moines to ramp up his criticism of rival Mitt Romney and the “establishment” in the Republican Party.

“There’s some in my party who have their own versions of the status quo, if you will, and you’ll find out pretty quick I’m not much of a status quo person,” Perry said. “The establishment’s not real fond of me and that’s o.k.”

“Some think we can fix Washington with a pair of tweezers, nibbling around the edges if you will.  I happen to think we need to take a sledgehammer to it,” Perry said, pausing to chuckle to himself. “That’s why I put forward a 20 percent flat tax that Americans can pay instead of trying to comply with the current mess.”

Perry promises that, as president, he would impose a pay freeze on congress and all federal employees but for those who work in public safety or are in the military. He also promises to veto every budget bill that includes “earmarks” that provide federal spending for the pet projects of members of congress.

“There is a clear choice, I happen to think, in this race between the status quo tinkers and those who represent the establishment and those that support bailouts,” Perry said, “they oppose major tax reform such as the flat tax and my approach which is to take a wrecking ball to the Washington, D.C. establishment.”

Perry made his comments during a brief appearance before a gathering of students and graduates of the University of Phoenix.   Find the audio here.