You are here: Home / News / Bachmann warns U.S. veering toward “banana republic” because of “crony capitalism” 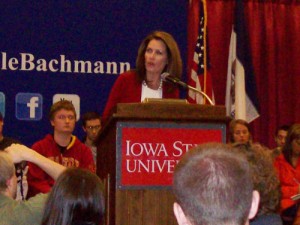 Republican presidential candidate Michele Bachmann says too many politicians are willing to do the bidding of big corporations, resulting in what she calls a “Bernie Madoff-style of government”.

“Some who are currently a part of Occupy Wall Street believe that the problem that we’re facing today is capitalism and that the problem today are free markets. It’s not,” Bachmann said over the noon hour during a speech in Ames, at Iowa State University. “The problem is government doing what both the constitution and decent morality prohibit and that is crony capitalism or forcefully taking your money away from you for the purpose of paying off a politician’s political friends.”

Bachmann opposed the Wall Street bail-out and criticizes both Democrats and her fellow Republicans like former President George Bush, for pushing it through in the fall of 2008.

“The problem is one set of standards that government has for individual Americans and another separate set of standards for those who make political donations to candidates,” Bachmann said. “That’s wrong and that has to stop.”

The current tax code, with its nearly four million words, is too complicated, according to Bachmann, who suggested big corporations “somehow pay their way out” of high taxes by lobbying congress.

“The problem is politicians who wink at their political donors and through the force of law put their competitors out of business.  Yes, you heard me right — they use the force of law to put their competition out of business because politicians assure their friends that with government’s financial backing, their businesses will never fail,” Bachmann said. “It happens every day and it has to stop.”

According to Bachmann, the level of cronyism in government is turning the U.S. into something akin to a “banana republic.”