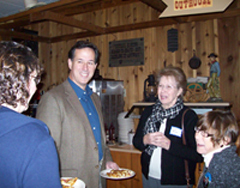 Republican presidential candidate Rick Santorum says the “flat” tax proposals from some of his competitors are a “difficult sell” because there is “no question” higher-income people would pay less — and lower income Americans would pay more.

“I think when people think ‘flat tax’ they think simple tax. They think one page,” Santorum says. “That’s really what people are looking for. They’re looking for the one page. They’re looking for a system that seems fair, that isn’t weighted for someone who have extra tax knowledge or who has lawyers and accountants who can figure out ways not to pay taxes.”

Santorum spoke early this morning at the Ames Conservative Breakfast Club, answering questions about foreign policy, abortion and gun rights. Santorum singled out rival Herman Cain for saying he supports the Second Amendment, but that states and local governments should be allowed to pass gun restrictions. Santorum calls Cain a “great marketer” but Santorum argues Cain’s past statements on issues like abortion, foreign policy and gun rights will wind up being a bigger concern for voters than the allegations that Cain sexually harassed female employees in the 1990s.

“If you look at his policy positions, they’re all over the map and I’m hopeful that as this situation comes to a resolution one way or another that people go back and look at his policies and his positions or his lack thereof or inconsistencies,” Santorum said during an interview with Radio Iowa following his appearance in Ames. “…I think the people of Iowa — they’re going to do their homework.”

Santorum told the crowd this morning he has the “most potential to break out of the pack” of candidates because he’s less well-known and voters don’t a negative image of him that he must combat.