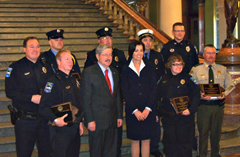 Officers and firefighters who received the Sullivan Brothers Award of Valor with Governor Branstad and Lt. Governor Pederson.

The award is named for the five brothers from Waterloo who all died while serving together in the Navy in World War Two.

Branstad told the winners the award is given to officers and firefighters who commit an heroic act beyond their normal call of duty where they know their safety or life may be in danger.

“These selfless actions are worthy of our sincere praise from the people of Iowa,” Branstad says, “So let me say it is truly an honor to be here this morning and to be able to present these Sullivan Valor Awards to these worthy individuals. On behalf of the people of Iowa, let me say ‘thank you’ for your heroic action.”

Mason City police officers Charlie Connor, Tiffany Creekmur, Lane Seifken and Ed Walthall, along with firefighters Lieutenant David Orr, Aaron Beemer and Peter Beiber all were on the scene when a car went into the Winnebago River on October 27th 2010. They went into the frigid waters to rescue the two young people in the car. One survived, and one died. 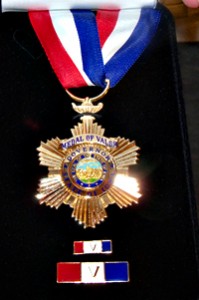 Officer Connor says everyone did what they had to do. Connor says it was a complete team effort as they worked to free the two boys from the car.

“This award is great, but it’s very bittersweet, we weren’t able to save one of the boys so our hearts go out to the family, Connor says, “But it is a very good award, a very nice award and we are very honored to receive it.” Officer Ed Walthall was surprised to get the award.

Walthall says it’s “very humbling” as he doesn’t talk alot about what he does at work and says it was “quite a shock to learn they had won the award.” Walthall’s 13-year-old son Spencer was on hand at the state capitol to see his dad accept a plaque and medal for the award.

“I think it’s pretty cool,” Spencer said. He says his dad does not talk much about the job and its dangers at home. Walthall’s wife Katrina says it is a nice honor for her husband. “I think it is pretty amazing for him, something like this, he was just doing his job, that’s all he was doing, that’s how he sees it,” Walthall said.

Lee County Chief Deputy Scott Bonar received the award for an incident last November where he drove his patrol car into a truck that was going the wrong way on Highway 61 north of Fort Madison. Bonar said he just reacted to the situation as the man could have run into and killed other motorists.

He says 150 yards behind there was a curve and the people behind them would not have see the truck coming. It turned out the man was having a medical reaction and he was someone Bonar knew. The deputy was on his way into work at the time and says it was a natural reaction, and he was surprised to win the award.

Bonar says he didn’t expect the award, as he was “just doing my job.” He says the sheriff and everyone complimented him on what he did, but he didn’t know they had submitted his name for the award.

You can listen to the governor’s complete remarks here: Sullivan Awards 9:53