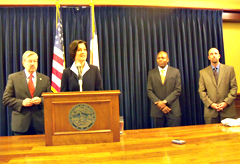 The governor and lieutenant governor are supporting a program where the football coaches at the University of Iowa, Iowa State, Nebraska and Kansas state are competing to sign up the most mentors for youth.

Reynolds says being a mentor does not require a special skill or talent, it just “requires a desire and a passion to play a role in young people’s lives.” She says mentors spend about an average of one hour each week to work on homework, or play football, with the goal of being a positive role model in the child’s life.

The Iowa Commission on Volunteer Service has created a mentoring partnership that has a network of 80 certified mentoring programs.

Reynolds says you should visit  www.iowamentoring.org to volunteer, or you can call 800-308-5987.

Chic Ejiasi the director of player development for the Hawkeyes joined the governor and lieutenant governor to talk about the program. He says the Iowa mentoring program is a great opportunity to get involved and make a positive impact on kids.

Brian Schwartze is the director of operations for the Iowa State football team. Schwartze says they have a goal of signing up three-thousand Iowans for the program, and says they signed up over 800 at the last game against Kansas. He says they don’t know how many of those people who have signed up are Cyclones or Hawkeyes.

“I think Chic and I can agree on this, that does not matter, we are happy to partner with them,” Schwartze says. The contest to sign up mentors for each state runs through November 21st.