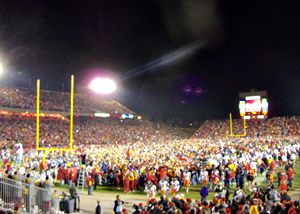 Fans stormed the field after ISU's upset of Oklahoma State.

The Cowboys came into the game averaging 52-points a game but where held to just half of that in regulation by the Cyclone defense which also came up with a big interception in the second overtime. Coach Paul Rhoads showed up for his postgame interview with a hardhat bearing the Cyclone logo.

“We’ve got a blue collar football team, we’ve got a group of young men who put their hard hats on every day and just continue to go to work,” Rhoads said, “couldn’t be prouder of the effort that they put forth tonight, it was a complete team effort.” Rhoads was asked if this victory ranked as his best as the Cyclone coach. 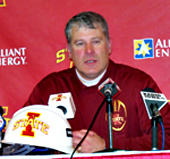 Rhoads says this was the sixth win they needed to get to a bowl game, but said it was also “neat” because it was historic as it was the first time I.S.U. has beaten a team in the top six.

He says they’ve had some historic wins in his three years, but this was special because it took place at home. Iowa State scored on its first play of the first overtime, and then Oklahoma State answered with a score.

Ter’Ran Benton picked off Brandon Weedon’s pass on the first play of the second overtime, and then Rhoads chose three straight runs with Jeff Woody, and he scored on the third one from four yards out for the win.

Rhoads says he didn’t want to kick a field goal as they hadn’t been getting the ball up and on kicks and had missed a field goal early in the game, so he wanted to go to Woody and power the ball into the end zone.

The Cowboys were lining up for a shot at the national title and the Cyclones were a double digit underdog, but Rhoads says they felt all along that things had set up for a possible upset with some breaks.

“Part of the thing that needed to happen in this game is that they needed to do things poorly, they needed to suffer some adversity, and they did,” Rhoads says. He says the mistakes the Cowboys made were at an all-time high in this game and part of it was them not playing their best, but part was his team playing well and that is what was needed to win.

The sophomore runningback Jeff Woody, of Southeast Polk, was swarmed by fans rushing the field after he crossed the goal line to score.

He says when he was running he didn’t think about it as it was just another play, but once he scored, he realized the significance of what happened. Woody says the offense and his run only finished what the defense started.

Woody says they held the number one or two offense in the nation under 25 points in regulation and part of the points were an interception return for a touchdown.

He says he can’t take credit as the defense put the offense in position to let him do what he does best — run the ball. Woody says beating an unbeaten nationally ranked team was just one part of what this game was all about.

He says it was senior night, it was a Friday night game on ESPN, they needed to win to get into a bowl, as the ESPN blog gave them a 12% chance of making a bowl. Woody says all the things combined to make a “perfect storm” and prove that they “are a good team again.”

Iowa State is now 6-4 overall and 3-4 in the Big 12. They go on the road for their final two regular season games, beginning with Oklahoma next Saturday.