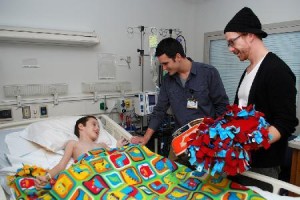 A warm and fuzzy effort to make fleece blankets for kids who’re battling cancer and other life-threatening diseases will be held next weekend in Iowa City.

Project Linus is named for the Peanuts cartoon character who constantly carries a blue security blanket.

“It’s not difficult at all,” Marco says. “Literally, you just have two pieces of fleece, you match them up and you tie. We had children as young as four last year and they did great.”

“Oftentimes they’re given upon admission,” Marco says. “They find out they’re going to be staying at the hospital, they come in, they receive the blanket, they get to snuggle with it while they’re there and they get to take it home. Otherwise, they function as gifts. Maybe it’s a patient’s birthday or with Christmas and Hanukkah and all those holidays coming up, so they’ll be used in that way as well.”

Last year, about 80 people helped to make 200 blankets and she hopes to beat that this time. She already has 50 blankets made as a head-start.

“I’m fortunate enough to have already taken in lots of donations,” Marco says. “I do have lots of fleece but we do ask people if they are able to, provide their own fleece and then we provide music and food and it’s a very fun atmosphere.”

After earning her first degree from the U-of-I in the theatre department last year, Marco is working toward her second degree in child life, the psycho-social care of pediatric patients.

“I grew up in a home that was focused on helping other people,” Marcus says. “My mom was always very involved and she started volunteering with Project Linus in our community in Chicago when I was in junior high.”

Marco says it was a natural for her to bring the tradition to Iowa City.

The event is next Friday, December 2nd, from noon to 6 PM at the U-of-I Theatre Building. Learn more at www.projectlinus.org