You are here: Home / Fires/Accidents/Disasters / Cause of fire at Hull city offices not known 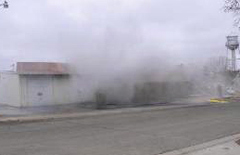 Smoke around the Hull city offices.

Investigators are still searching for the cause of Saturday’s fire that swept through the city office building in the northwest Iowa town of Hull.

The Sioux County Sheriff’s Office reports that about 11:15 A.M., they received a report of a fire in progress at 1133 Maple Street in Hull, the address of the Hull City Offices.

Upon arrival on the fire scene, the Hull Fire Department found the structure was fully involved in fire. Three other fire departments assisted to get the fire under control, which took about two hours.

The building suffered extensive damage. Authorities say that the cause of the fire is undetermined at this time and the State Fire Marshal’s office will be assisting the Hull Fire Department in conducting the investigation. 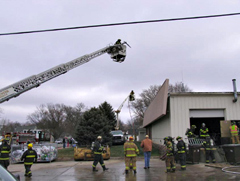