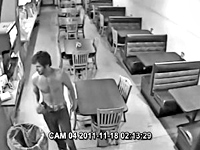 Brandon Plummer on video from a store after alleged assault.

An Iowa City man is charged with attempted murder for an assault last week on a police officer. Iowa City police say a Crime-Stoppers tip led to the arrest of 20-year-old Brandon Leo Plummer of Iowa City.

Plummer is accused of choking Sergeant Brian Krei and slamming the officer’s head into the street after he approached Plummer for obstructing traffic last Friday around 1:20 in the morning. A woman came to help Krei and Plummer fled the area and went into a local business.

The department says officer Krei briefly lost consciousness and was treated for minor injuries. He has since returned to work. The charge against Plummer is a felony that has a maximum sentence of 25 years if he is convicted.