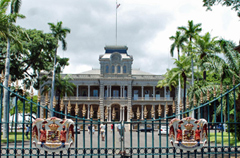 Republican presidential candidate Mitt Romney on Monday raised questions about President Obama’s plans to take a 17-day vacation, and Democrats fired back, accusing Romney of “phoning it in” on the campaign trail.

“He told congress that they needed to stay in session and pass his tax break, for the payroll tax, and that they shouldn’t leave for vacation until they did that,” Romney said Monday evening, “and yet he’s going off for 17 days for golf in the sun.”

President Obama and his family will fly to Hawaii, where Obama was raised, for Christmas. According to the White House website, the Obamas leave for the 17-day trip on December 17. Romney suggested Obama should spend more time in Washington, D.C. and cut his Hawaii vacation short.

“I just think it’s time to have a president whose idea of being ‘hands on’ does not mean getting a better grip on the golf club,” Romney said.

Romney made his comments last night during a telephone town hall meeting with Iowans and Iowa Democrats immediately ridiculed Romney when news of his remarks got out for “phoning it in” on the Iowa campaign trail as yesterday Romney had a fundraiser at his mansion in San Diego. Democrats also cited news reports indicating Romney spent 212 days out of Massachusetts during his last year as governor, when he was serving as chairman of the National Governors Association and gearing up for his first run for the White House.

Romney is scheduled to campaign in Iowa this weekend, with a stop in Cedar Rapids on Friday. Romney is among the candidates who will appear in Des Moines Saturday for a nationally televised debate.