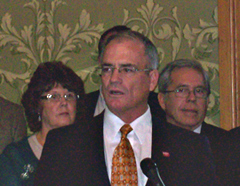 A leader in the 2010 effort to vote three Iowa Supreme Court justices off the court because of their ruling on same-sex marriage is backing Michele Bachmann’s bid for the White House.

Former State Representative Danny Carroll of Grinnell joined a group of pastors this morning at the statehouse to publicly endorse Bachmann.

“We come here this morning to ask Christians across Iowa to support Michele Bachmann,” Carroll said. “…We have determined that Michele Bachmann is Biblically qualified to be the president, to be a leader. She is capable. She is trustworthy. She fears God and she hates dishonest gain.”

Carroll also praised Bachmann’s “no-compromise” leadership.  Pastor Bill Tvedt of Oskaloosa pointed to the Bible and a chapter in Exodus which describes leaders as people of “truth” who “hate covetousness.”

“I believe that she is guided by principles, not political calculations,” Tvedt said. “I believe that the leader of our nation has to be a person who will always tell the truth and always do the right thing.”

Pastor Brad Cranston of Burlington suggested some of the other candidates are just saying what they believe Iowans want to hear.

“But I think it’s important we examine the records,” Cranston said. “With Michele Bachmann, there aren’t any explanations as to why she had to violate her convictions and decisions made in the past. There’s no flip-flops.”

Pastor Brad Sherman of Coralville suggested it’s time for Christians to “stand up” and be counted.

“I’m confident that Michele Bachmann is a principled leader and she won’t compromise and she won’t just make political deals to get along with people, but she’s going to stand on her principles,” Sherman said. “That’s what we need — and we know her principles are based on scriptural things.”

As for whether the folks in this group had ever considered supporting Newt Gingrich, Tamara Scott of the Concerned Women of America cited the “personal baggage” of Gingrich’s two divorces and three marriages.

“When you look at the candidates and you have a strong leader like Michele Bachmann, why go with another candidate who may have distractions?” Scott asked.

The group plans to travel around the state holding news conferences over the next three days to urge others to join them in supporting Bachmann. Listen to today’s news conference and read more background here.