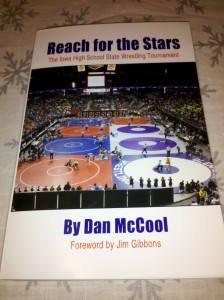 An annual event that draws thousands of spectators and athletes to Des Moines every February is the subject of a new book.

“Reach for the Stars: The Iowa High School State Wrestling Tournament” includes 620 pages of stories, facts and photos from the event’s 90 year history.

Author Dan McCool says he conducted over 160 interviews for the book and one of highlights involves the story of Jack Barron, who won a state title in 1980 as a member of the Iowa School for the Deaf.

“This is how smart Iowa wrestling fans are – here’s a guy, deaf, wrestling for a state championship and he wins it. Obviously, he’s not going to hear (the crowd) if they applaud, so they got the idea to stand up and stomp their feet,” McCool explained. “(Barron) could feel the vibration and he must have thought the place was coming down.”

The early years of the state tournament were much different than today – primarily because of a lack of strict rules and participation limits. The first tournament in 1921 included a place winner at 95 pounds who was just 11 years old.

“I found an account of a situation where Esterville was going to wrestle Fonda. They found out a couple of the guys on the Fonda team were 20, 21 or 22 (years old),” McCool said. “They were staying in school long enough to wrestle and as soon as wrestling season was over, they dropped out.”

The Iowa High School Athletic Association began sanctioning the tournament in 1926 and put stricter guidelines in place. McCool became a fan of wrestling as a youngster, growing up in Clarion, when a friend won a state championship. He later covered the sport for 30 years as a writer for the Des Moines Register.

McCool said he enjoys the “individual aspect” of the sport. “You can have a terrible shooting night and still win a basketball game because the four other guys might chip in for you. You might miss some really big blocks in football, but you have 10 other guys who might be able to patch in your hole,” McCool said.

The championship round of the 2012 State High School Wrestling Tournament is expected to be sold out for the 25th consecutive year. McCool plans to be at the tournament, scheduled for February 16-18, to sign and sell copies of his book. The book is also available online at www.Amazon.com or www.BarnesandNoble.com.