You are here: Home / Crime / Courts / Update: Knoxville arson suspect turns himself in 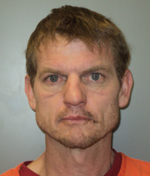 Update: Authorities say 45-year-old Allen Brommel turned himself in today at the Warren County Sheriff’s office.  He is being held on a charge of second-degree arson.
Previous story:
Authorities in south-central Iowa are asking for the public’s help in locating an arson suspect. David Allen Brommel of rural Indianola is wanted in connection with a Christmas day fire that damaged an office building in Knoxville.

The Monroe County Sheriff’s office reports Brommel was last seen on foot south of Knoxville shortly after the fire, which was discovered just after 5 a.m. Sunday. The building formerly housed a Department of Human Services office.

A D.H.S. office in neighboring Warren County was also damaged by fire earlier this month, but it’s unclear if the two cases are related. Charges are pending against Brommel, who pleaded not guilty to felony drug charges in November. He was released pending trial.