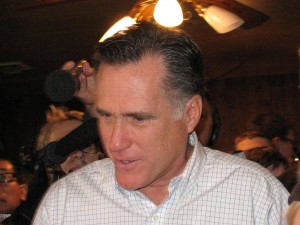 Five presidential candidates were in Iowa Sunday, each expressing confidence about their chances in Iowa’s Caucuses.

A new Des Moines Register “Iowa Poll” shows Mitt Romney getting support from 24 percent of likely caucus-goers, with Ron Paul at 22 percent and Rick Santorum getting 15 percent support. However, four out of 10 respondents said they might change their minds before the Caucuses start Tuesday night. Plus, in the final two days of the survey, pollsters found Paul falling and Santorum surging into second place.

During an appearance on “Meet the Press” on NBC Sunday, Santorum explained he endorsed Romney in 2008 because he didn’t think John McCain should win the GOP nomination. Santorum went on to say the question is whether you can “trust” Romney to fight for the entire Republican platform. During an appearance in Atlantic Sunday afternoon, Romney mentioned that 2008 endorsement from Santorum and called Santorum a “career” politician, but Romney’s sharpest attacks were focused on President Obama.

“I don’t think he understands that an opportunity society, a merit society is one of the things that propels our economic vitality and the greatness of our people,” Romney said to a crowd packed into The Family Table restaurant. “I think in some respects the president takes his inspiration from the social Democrats of Euope that would change us into a European-style welfare state.”

About 100 people turned out in Atlantic Saturday to hear Newt Gingrich. Gary Nelson, a 76-year-old farmer from Audubon, asked Gingrich for a favor.

“I’ve seen a lot of you fellas come and go, but I’ve only sought to shake the hands of two others and they both went on to win,” Nelson said, “so I’d like to shake your hand.” The crowd applauded as the handshake happened and Gingrich quipped: “That was a good omen.”

Michele Bachmann said on ABC’s This Week that the polls don’t reflect the true state of the race and there will be a “profound shift”.

“Polls sometimes belie the truth on the ground and that’s what we see,” Bachmann said in an interview with ABC’s Jake Tapper. “This isn’t just about polling. This is about what we’re seeing in reality and I think Tuesday night people are going to see a miracle.”

Texas Governor Rick Perry was off the trail Sunday, only making an appearance on FOX News Sunday. Perry will make his pitch to western Iowans today and then hold a rally in Perry, Iowa, tonight. Ron Paul’s son, Kentucky Senator Rand Paul, will be in Iowa today to campaign with his dad. Romney campaigns in eastern Iowa much of the day, then holds a rally in central Iowa tonight. Santorum and Bachmann plan to campaign in central Iowa all day. Gingrich plans to campaign in eastern Iowa.

(Reporting in Atlantic by Ric Hanson of KJAN)