A graduate of the Des Moines University who was a friend of Martin Luther King Junior gave a humorous and passionate keynote address today at the state birthday celebration honoring King.

Dr. William Anderson now lives in Detroit and is a vice president at the Detroit Medical Center. Anderson said he found a lot of changes since he went to school in Des Moines.

“I tried to get a pizza at Babe’s — it’s out of business now — but in 1952 I could not get served at Babe’s anyway,” Anderson said. “There were fraternities on campus on what was still the Des Moines College of Osteopathy in 1952, but I could not join a fraternity because I was the wrong color.”

He said the changes in civil rights now allow him to go anywhere and do anything when he visits Des Moines. Anderson said he could sleep now in the Savory Hotel, and he couldn’t do that in 1952. And he brought lots of laughter when it said, “It was nice too and I enjoyed it. I was so glad to be there I used every towel there was.” 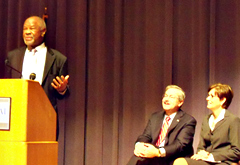 Anderson told how he was on the phone with Martin Luther King Junior’s wife trying to get King to make a visit to Detroit on the night King was shot.

He cried when he heard the news. Anderson said he is proud to call himself a “convicted felon” because of the experience he had while working with King to end segregation.

“I hope that none of you ever have to go to jail fighting for the rights that you deserve as United State citizens. But should you be in the position where your options are, accept segregation and discrimination, accept dehumanization, accept humiliation. Accept it or the option is, go to jail, I hope too that you will be willing to go to jail,” Anderson said.

Anderson challenged the audience to not stop pushing for the things that King stood for. “We are not there yet, we’ve got a lot of work to do,” Anderson said. “The law is on our side now, we did not have that in 1951. We’ve got compassionate leaders that are willing to stand up for what is right and for truth and for justice.”

Anderson concluded by reminding everyone that there could be another young person out there who is the next Martin Luther King Junior.

Anderson came to speak at the invitation of Governor Terry Branstad who served as president of Des Moines University before deciding to run for office again. Anderson served on the board of directors of the school for many years.

You can listen to Anderson’s complete speech here: Anderson 31:47