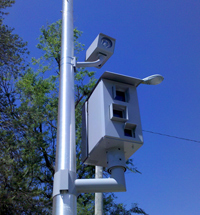 The City of Des Moines continues to see an increase in cash from speed and red light cameras.

The latest figures from the capital city show a net revenue of $192,365 from just over 4,100 camera-recorded violations in the month of December.

The revenue more than doubled the amount collected in November, which was just over $95,000, and has steadily climbed since the city first started charging fines in August. The city has five red light cameras and one mobile speed camera, but the majority of the violations come from a fixed speed camera on Interstate-235.