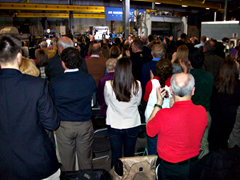 Workers in Cedar Rapids trying to get a picture of President Obama.

About 300 people have gathered in a Cedar Rapids manufacturing plant to hear President Obama speak this morning.

The crowd is a mix of elected officials, Obama supporters and employees of the manufacturing company that’s hosting the president.

Linda O’Hara of Cedar Rapids, a registered Democrat, is one of the invited guests. “I helped with the Caucus and have done some volunteer phone-calling, hosted a house party and I guess this is my reward,” O’Hara says.

Obama’s visit to Iowa is part of the president’s tour through five “battleground” states which will be crucial to his bid for reelection.

O’Hara believes Obama has a “good chance” of winning Iowa in November. “Unfortunately our society thinks everything is a quick fix and sometimes the quick fixes are not the best fixes…Some things are turned around,” O’Hara says.

“I lived through the ’70s and ’80s. People don’t remember. The situation wasn’t too good then. We had 18 percent interest, among other things and I remember when the recovery started and this has the feel of a recovery.”

State Representative Tyler Olson, a Democrat from Cedar Rapids, says the aggressive campaign organization Obama has on the ground here in Iowa will be buoyed by the state’s improving economy. “I think his message of economy recovery, job creation, particularly today manufacturing and encouraging manufacturing growth are strengths that Iowa already has and we’ll be able to build on those,” Olson says.

The host company, Conveyor Manufacturing and Engineering, makes augers that are used in the agriculture and pharmaceutical industries to convey material from one point in a plant to another. Keith. Blozvich Cedar Rapids has been a welding fabricator at Conveyor Manufacturing for over nine years and he says it’s “pretty neat” to have the president visit his workplace.

“I think he’s promoting a lot of the American-made products, jobs here at home and products that come from here to stimulate our economy,” Blozvich says. One of the company’s managers made the official presidential seal that was hung on Obama’s lectern.

“It’s actually burned out on our plasma arc burn table,” Blozvich says. Lisa Tuetken of Monticello works in the company’s office. She also likes the president’s focus on rebuilding America’s manufacturing base.

“You know, if they can keep it here in the United States as much as we can, you know you’ve got hard workers, good workers, they’re detailed,” Tuetken says. “They want it to be put together right.”

Obama is due to speak at about noon.