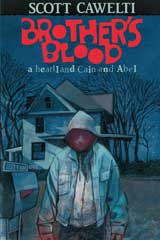 A recently released book about one of the most brutal murders in Iowa history has drawn interest that has surprised its author.

Scott Cawelti chronicled the 1975 murders of Leslie and Jorjean Mark and their two young children in their farmhouse northeast of Cedar Falls in the book “Brother’s Blood: a heartland Cain and Abel.”

The book also details the investigation and subsequent trial where Mark’s brother Jerry was convicted of all four murders. Cawelti says he’s surprised at how many people are still intrigued by the story over 35 years later.

“It’s in its fourth printing already an it’s just been a kind of steady of constant demand, print runs have been small, but we’ve been selling quite a few already, and it’s been surprising, I think its up around 5,000 copies now,” according to Cawelti. “Everywhere I go there’s a lot of concern about the case, because people remember it, even kids remember it because their parents have told them about it.”

The Cain and Abel reference was first made by the prosecutor who said Jerry Mark’s motive was anger that his younger brother had been chosen over him to take over the family farm operation. Cawelti’s book uses the vast amount of information collected in the investigation, his personal interviews of the people involved, and some recreations of possible interactions between the family members to tell the story.

Cawelti, a retired University of Northern Iowa professor, followed the case with both a professional and personal interest. “The hard part about the story is that Jerry Mark killed his niece and nephew, a 5-year-old old and a one-and-a-half-year old, Jeff and Julie in their beds, just shot them in the face and in the heart, execution style…just cold blooded execution,” Cawelti says.

“Les Mark was shot five times JorJean Mark was shot four times, so it was really just kind of a slaughter of these poor innocent people in their home. On Halloween night, there’s another chilling thought.” The brutalness of the murder was even more shocking to Cawelti and others when Jerry Mark was identified as the killer.

“He was a lawyer, a Peace Corps volunteer and I graduated a year after him in high school, he was vice president of the senior class, and I knew him at Cedar Falls high as one of the greatest, nicest, most polite, smart guys you’d ever want to meet,” Cawelti said. “So he had everything, his family was wealthy, he was smart, he had gone to law school, and he turned a mass killer. Again, it just sort of boggles the mind that anyone could fall from such a high place.”

In appearances promoting his book, there’s one question that keeps coming up for Cawelti. “Do I think it he did it?,” Cawelti said with a laugh. “Because the circumstantial evidence was everywhere in the case and there were no hard facts, I mean no hard evidence that put him on the scene, there is some chance that he was railroaded and he has insisted that. He keeps saying he is innocent over and over again to anyone who will listen.”

Cawelti said people who don’t know the case very well or have just heard about it, want to know if Cawelti thinks he did it and he gives an extensive answer to that question. Jerry Mark appealed his case several times and in August of 2006 a District Circuit Court of Appeals judge ruled he should be retried or set free over questions about evidence in the case.

A three-judge panel then reversed the district court judge after an appeal from the state. Some people think the whole story could be a movie, but Cawelti doesn’t think so.

Jerry Mark is now 69 and Cawelti said Mark has run out of money to fund any more appeals and is serving four consecutive life sentences at the Iowa State Penitentiary. The book is published by the Ice Cube Press, and you can find it on the Ice Cube Press website at: www.icecubepress.com, or through other booksellers such as Amazon.