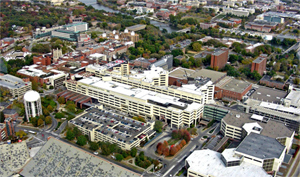 Aerial view shows the parking ramp in front of U-I Hospitals that will be replaced by the new children's hospital.

Designers gave the Board of Regents an update Monday on the plans for the new children’s hospital at the University of Iowa.

The plan calls for removing a parking ramp at the front entrance of the main hospital and putting the new children’s facility in its place.

Architect Kim Stanley says the new building will be just east of Kinnick Stadium, where Iowa plays football. “I’d say hands down this is a once in lifetime kind of site for a children’s hospital, adjacent to the stadium as it is, it will be a big crowd pleaser inside the hospital,” Stanley says.

She says the existing parking ramp has been an impediment to letting light into the hospital and removing it will open up the entire layout of the facility. 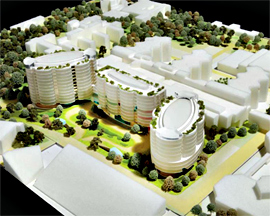 An architect's rendition of the new children's hospital building. It's the oval at the right.

Two floors of the $285-million children’s hospital will be underground, but the rest will rise up and give views to the west.

“So everything basically above the fourth floor will actually have views into the stadium, which I think will be a very exciting component of the children’s hospital,” Stanley says.

The building will have 11 floors above ground, but she says it is designed in an oval shape and positioned to give it more of a human scale that doesn’t appear to be so large.

“But also, buildings of this size create somewhat of a microclimate around them, and we wanted to make sure the prevailing winds moved fluidly around this form, and so the shape of the oval does facilitate that, and it also does certainly allow more natural light into the building,” Stanley explains.

Construction is scheduled to begin on the new building in October and it is expected to be open by 2016.