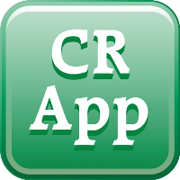 Logo for the Cedar Rapids app.

The City of Cedar Rapids recently introduced an application for smartphones, allowing followers to gain unique access city services. But, the “app” is drawing attention for another reason.

The icon for the application on the city’s webpage features the letters C-R App — or as some are pronouncing it “CRAPP.” Cassie Willis, a spokesperson for the city, says she welcomes the publicity.

“You know what? Anybody who is willing to go take a look at the website and download the app is welcome to do so,” Willis said. “If this gets us more people who are willing to download and use the app, that would be fabulous.”

The abbreviation of Cedar Rapids to “C-R” is nothing new.

Willis believes the city is “lucky” to have initials with a sort of double-meaning.  “We use the initials CR in all kinds of things. We have an e-newsletter called the CR City Source. We have a website called CR Progress, where you can learn more about all the progress we’re making on our flood recovery. We use CR in a new initiative to clean up our community called CleanUpCR. So, this is nothing new for us,” Willis said of CR App.

“But, hey, if it gets us more publicity and more people are willing to go take a look at the app, we’re willing to welcome them.” Once downloaded to a smartphone, the mobile application appears as “Cedar Rapids,” not “CR App.” Willis believes it’s been a successful venture. 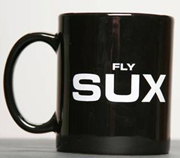 Mug from the Sioux City airport.

She said the city has recorded 1,000 downloads of the mobile application since it was launched two months ago.

City leaders in Sioux City can probably relate to the struggles people in Cedar Rapids might have with “C-R App.” The three letter designation for the Sioux Gateway Airport is “SUX,” which some people pronounce “sucks.”

Airport officials lobbied the F.A.A. for several years to change to code. Federal officials basically refused, so the airport decided to essentially embrace the designation by featuring the “SUX” code on t-shirts, hats, postcards and coffee mugs sold in the airport’s gift shop.