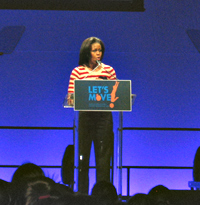 First Lady Michelle Obama talks to kids about nutrition during a stop in Des Moines.

Her stop in Iowa started a four-state swing to celebrate the second anniversary of her “Let’s Move” initiative.

“Hello everybody, it’s great to be here in Iowa,” Mrs. Obama said as she stepped on stage. The Let’s Move program was launched in February 2010 with the goal of reducing childhood obesity.

“There is a reason why we wanted to come here to Iowa to be with all you. That’s because I am so proud of what you all are doing to make Iowa the healthiest state in this country by 2016,” Mrs. Obama said.

Governor Terry Branstad, who introduced the First Lady, is helping lead the Healthiest State Initiative in Iowa. Mrs. Obama said the things being done in Iowa to promote exercise and healthy eating provide a great model for other states.

“We want every single state in this country to do exactly what Iowa is doing,” she said. Mrs. Obama asked for the kids’ help to make Iowa and all of the states the “healthiest they can be.”

Prior to the First Lady’s appearance, the school kids heard from several speakers including Olympic gymnast Shawn Johnson, Iowa State basketball coach Fred Hoiberg and fitness expert Bob Harper, who serves as trainer on the television show The Biggest Loser. The crowd was also were entertained by American Idol Season 9 finalist Katelyn Epperly.

Harper presented a giant birthday “cake” made of bananas, oranges and other healthy snacks. The nearly two-hour long program closed with a confetti and balloon drop and the First Lady and everyone in the arena performing the Interlude Dance.

The Interlude has become a dance craze at the University of Northern Iowa with fans and students performing the dance during basketball games. The creators of the dance, U.N.I. students Ian Goldsmith, Scott Connerley and Tyler Wright, joined Mrs. Obama on stage to demonstrate the dance which consists of moves such as hand claps, waving of the arms, fist pumps, and what they described as “karate chop robots.”