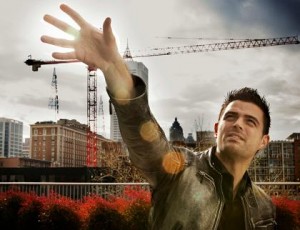 One of the most recognizable faces in home improvement TV shows is in central Iowa today, offering his designing advice and short cuts for sprucing up our houses.

John Gidding, who hosts the HGTV shows “Curb Appeal” and “Designed To Sell,” says two inexpensive items you can easily update are your house numbers and your mailbox.

“Those are literally the first things people are looking for when they’re looking for your home,” Gidding says. “For under $50, you can get a brand new set of house numbers that match the metal finish of whatever your door hardware is and a brand new mailbox that’s really going to make a difference for when people realize they’ve arrived at your address that everything looks manicured and well taken care of.”

He says there’s no excuse for a crooked, rusty mailbox or for displaying your address with those 25-cent stick-on numbers.

Gidding says Iowans could also bring an updated look to their entryway for the cost of a small can of paint and a brush.

“Focus on the front door,” Gidding says. “It’s a great opportunity to push yourself out of your comfort zone a bit as far as color is concerned, especially because if you make a mistake, it’s an easy one to fix. A bright-colored front door is a great way to draw your eye to the entrance.”

Wreaths aren’t just for Christmas. He says a tasteful wreath can add color to the front of your house during the wintertime.

Also, the technology used in solar lighting has evolved greatly just in the past five years.

“If you don’t have the time, the money or if your entire front yard is frozen to install low-voltage electricity, solar lights provide a great way of illuminating the path up to the front door,” Gidding says. “It’s another great way of embracing the lemons that winter throws at us and making lemonade. If your house looks warm and inviting on the way up to it, you’ve already improved your curb appeal tremendously.”

Gidding, an architect, actor and former model, is appearing at the Des Moines Home and Garden Show both today and tomorrow at the Iowa Events Center.