You are here: Home / Crime / Courts / Man accused of running down officer at the State Fair is found guilty 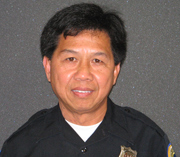 It took a jury less than three hours to deliver a guilty verdict today in the case of a man who was driving drunk and hit a Des Moines police officer outside the Iowa State Fair last year. Keith Terry, a North Carolina resident, now faces up to seven years in prison.

Polk County Attorney John Sarcone believes the evidence in the case weighed heavily in the prosecution’s favor. “I think the verdict the jury rendered was the correct verdict given the facts and circumstances,” Sarcone said. “Certainly, Phoukham Tran, he’s a wonderful person and to see what happened to him is very upsetting because he was doing his job that night, protecting people, and he ends up almost dying as a result of what happened.”

The 52-year-old Tran spent five months in hospitals and rehabilitation centers before returning home last month. Authorities said Tran was thrown 47 feet when Terry ran a red light and struck the officer – who was directing traffic outside the fairgrounds. Breath tests showed Terry had a blood alcohol level of .264, more than three times the legal limit.

Sarcone said he wasn’t surprised Terry sought a jury trial. “Mr. Terry has a right to a jury trial like anyone charged with a criminal offense. So, he exercised that right and that’s fine,” Sarcone said. “We’re willing to try those cases and the jury came back with the proper result.”

Terry’s defense lawyer argued during the trial that the collision was an accident.