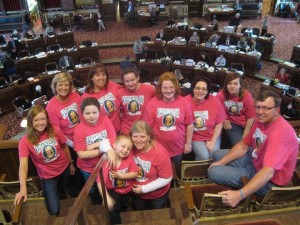 The group started a lobbying campaign on the issue in January, motivated by the death of seven-year-old Kadyn Halverson of Kensett, which is in north central Iowa. She was killed by a hit-and-run driver last May as she tried to board her school bus. Her mother, Kari Halverson, spoke with dozens of legislators personally, urging them to pass a bill that toughens penalties for those who pass stopped school buses.

“It’s been quite a while since school bus safety’s been addressed,” she said this morning, “so I think it’s definitely time to be doing that.”

“You can increase the violations and things like that,” Meyer says. “But we need to catch ’em.”

The bill calls for a study of placing cameras in school buses.

The pink t-shirts worn by Kadyn’s family and friends feature a photo of the girl, wearing her backpack and standing in front of her school bus. Three girls who went to school with Kadyn were in the senate today to see the bill pass, including 10-year-old Ambur who rode the bus with Kadyn.

“We wanted to see them debating on Kadyn’s Law,” she said.

Ambur’s mother, Kim Koenigs, said she and her daughter talked about Kadyn as they drove to Des Moines this morning.

“She misses her,” Koenigs said. “…I wanted to make sure she saw this.”

Koenigs helped craft the lobbying strategy for the family which included a pink binder filled with information about school bus safety, and a poignant letter from Kadyn’s mother. The bill passed the Senate unanimously. Similar legislation is pending in the House.