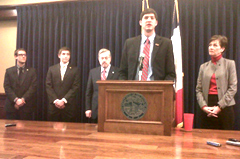 Governor Terry Branstad has asked the student body presidents at Iowa, Iowa State and U.N.I. to join his lobbying campaign to change the minds of House Republicans who’ve proposed deep cuts in state support of the universities.

“We’ve got to work through this process, but we think there’s some wisdom in the choice that we made and the recommendations that we made and we’re going to fight for them,” Branstad told reporters this morning.

“And I think this is an indication that when I present a budget, I stand behind it and will work hard for it.”

According to Branstad, the student leaders need to “have a voice” in the budget process because ultimately they’re going to have to live with the budget that’s approved. Iowa State University student body president Dakota Hoben of Grandview, Iowa, is a senior majoring in ag business.

“We are excited about the positive number that we have seen from the governor’s budget. I think in a lot of ways students do see this as the potential light to the end of the tunnel,” Hoben told reporters. “…We do have a long-standing tradition of excellence within education and to continue to maintain that, that will take positive numbers in the future.”

The president of the board that governs Iowa State, the University of Northern Iowa and the University of Iowa says tuition rates will stay the same for the fall semester if legislators approve Governor Branstad’s spending level, but there’s no such guarantee if House Republicans succeed in cutting state support of the schools.

House Appropriations Commitee chairman Scott Raecker of Urbandale — the Republican leading budget talks with the governor — issued a written statement in response to Branstad’s remarks.  “There are several significant budget issues that need to be resolved including funding of Medicaid, mental health, and previously committed property tax credits,” Raecker said. “In that list, funding of the Regents institutions has been clearly identified as an item of difference between the various budget proposals that will need to be resolved and will be part of the budget discussions. “

(This story was updated at 10:27 a.m. with a response from House Republicans.)