You are here: Home / Health / Medicine / New document will help with end of life decisions 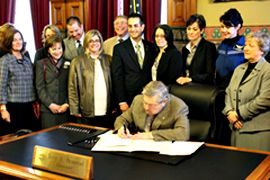 Iowans will soon have a more definitive way to tell their families and doctors how they want to be treated at the end of their life.

The governor recently signed a bill creating a one-page document called an IPOST or Iowa Physician’s Order for Scope of Treatment.

Stephanie Anderson, director of hospice care at St. Luke’s Hospital in Cedar Rapids, says IPOST allows a person to have specific conversations about their health care treatment choices and what they want.

“They align those goals with what is quality of life to them, what they want for themselves as their disease is progressing. Having conversations and then translating that into an actionable medical order, so in the event that they become unable to speak for themselves their health care treatment wishes can be carried out by the health care provider community,” Anderson says.

Many people already have already made out living wills and assigned medical power of attorney that are known as “advanced directives.” Anderson says the IPOST adds to those directives. “A living will is a philosophy of care for a hypothetical situation that may or may not occur to a person in the future. And a medical power of attorney is naming somebody who would carry out your wishes if you are unable to,” Anderson explains.

The IPOST allows the person to tailor their wishes for treatments based on the conversations with the medical providers and based on the potential outcomes. “Whether they would want resuscitation or not. Or maybe they would want to go to the hospital and they want to be treated with everything that is possible, antibiotics, ICU care, but they wouldn’t want dialysis. Or they would want full treatment no matter what. This form gives them the ability to decide what they would want for their medical care in those situations,” according to Anderson.

The IPOST started with a conversation between St. Lukes and its rival in Cedar Rapids, Mercy Medical center. They got together and pilot program was started by the legislature in 2008 in Linn County, and then a second pilot project was conducted in Jones County to see how it worked in a more rural area. Anderson says the document works best when family members join in with the patient in talking about the issues with their doctor.

“We have found the tool actually helps patients, families and providers bring these conversations up, because it can be awkward,” Anderson says. She says the IPOST is an option that can be brought up for discussion as something that’s available and it seems to make it easier on everyone to get the conversation underway. Anderson says national studies have found patients want to talk about these issues, but often wait for the doctor to bring them up, and the doctor doesn’t always do that.

The IPOST option becomes law on July first, and Anderson says several cities are already preparing to roll it out as an option. For more information on IPOST, visit: www.hpcai.org.