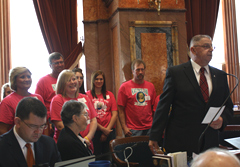 Kari Halverson smiles as Rep. Henry Rayhons introduces her to the House.

Family and friends of a northern Iowa girl who was killed as she tried to board her school bus last spring were in the Iowa House today, watching as legislators approved a school bus safety measure.

Kari Halverson of Kensett, the mother of seven-year-old Kadyn, spoke with reporters shortly after the House passed the bill.

“Very exciting, very emotional,” Halverson said. “I’m speechless. Everything being unanimous, I mean, we couldn’t have asked for a better outcome for this.”

The bill passed the Iowa Senate without a dissenting vote back on March 1st and now goes to the governor, who has said he’ll sign it into law. Halverson has invited Governor Branstad to hold the bill signing ceremony in north central Iowa.

“We are hoping that he will be able to make it to Kadyn’s school and sign it in front of her friends,” Halverson says, “and let them be a part of it.”

Halverson, her family and close friends launched a lobbying campaign in January to urge legislators to make the penalty for passing a stopped school bus tougher and to address other safety concerns about buses and the students who ride them to school. Halverson made at least 10 trips to the statehouse to meet face-to-face with legislators.

“Oh my goodness, I’ve learned a lot,” Halverson told reporters late this morning. “I’ve learned that our legislators have hearts, that they’re real people, with feelings. It’s just nothing like I thought it would be. It’s just been so much better and I can’t thank everybody here enough for that.”

Halverson is wearing a pink t-shirt with her daughter’s photo on the front and the words “Kadyn’s Law” above it. She and her family made about a thousand of the shirts. Kari Halverson and about a dozen children and adults wearing the matching shirts were invited to stand on the House floor late this morning as the bill was considered in the House.

The 32-year-old man who hit Kadyn Halverson pled guilty to vehicular homicide and has been sentenced to spend 15 years in prison.