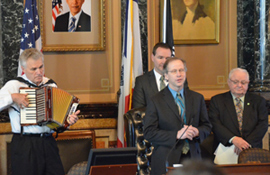 Today is a last day of the work week for members of the Iowa Legislature, so lawmakers celebrated St. Patrick’s Day this morning.

Senator Joe Seng, playing the accordion, and Senator Merlin Bartz, on tuba, gave a brief concert, opening with the tune “In Heaven There Is No Beer.”

AUDIO of their music-making.

AUDIO of the Senate’s opening ceremony featuring prayers, a song and a speech from an Irish politician.

Later, after reading from the Confession of St. Patrick — the patron saint of Ireland, Bartz sang “Oh, Danny Boy” as Seng accompanied on his accordion. Senate President Jack Kibbie read a poem he said was titled, “An Irish Blessing.”

“May all life’s passing seasons bring the best to you and yours, a faithful friend to share, for every sigh a sweet song and an answer for each prayer,” Kibbie said. 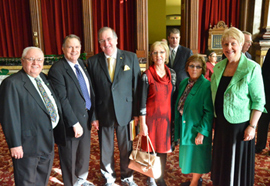 Kibbie had a guest in the senate, too. Maurice Cummins is a member of Ireland’s senate.

“It’s my first visit to Iowa and I must say that you’re doing a wonderful job and you’re laid on the weather for me and all just after arriving,” Cummins told senators. “I was told to probably expect snow, but little did I expect 70, 80 degrees of heat, which is absolutely wonderful.”

Cummins is headed to Emmetsburg, Iowa, for that community’s annual St. Patrick’s celebration.