You are here: Home / Human Interest / Iowa Catholic leader jets to Cuba to see the pope 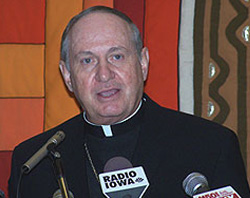 For even the most devout and dedicated Catholics, meeting the pope is an extremely rare experience, but for one Iowan, it’s becoming almost routine.

The bishop of the Des Moines Diocese is flying with several bishops from other states to Cuba on Saturday as a pilgrimage to see Pope Benedict.

Bishop Richard Pates says he’ll likely get a few moments with the pope, though Pates says he was just at the Vatican a matter of days ago.

“When I was in Rome, we had an audience with the Holy Father a week ago Saturday,” Pates says. “At the conclusion of it, I told him I would see him in Cuba and he said, ‘Oh, are you going there?’ and I said, ‘Yes,” and he said, “Well, good, I will see you there.'”

Between 100- and 150,000 people are expected for the event in Havana and Pates wasn’t certain how much time he’d actually have with the pontiff.

Pates says, “We’re invited to concelebrate and therefore will be among the bishops from Cuba and from South America who will be concelebrating with the Holy Father that day so we’ll be in proximity at that time.”

The bishop is chairman of the International Justice and Peace Committee of the U-S Conference of Catholic Bishops. Other bishops in the delegation are from Brooklyn, New York; Tucson, Arizona; and Seattle, Washington.

“Part of the reason for the presence is just to show solidarity with him in support of the purposes that he has outlined also for his own trip,” Pates says, “to whatever degree we can express that to him or to the others in Cuba, we’ll try to make that known.”

Pope Benedict said today how communism no longer works in Cuba and the Church is ready to help the island nation find new ways to move forward.

The pope is quoted as saying: “Today it is evident that Marxist ideology in the way it was conceived no longer corresponds to reality. New models must be found with patience and in a constructive way….we want to help.”

The Diocese of Des Moines includes 81 parishes in 23 counties in central and southwest Iowa with about 140,000 members.