You are here: Home / Health / Medicine / State may now issue both birth & death certificates to parents of stillborns 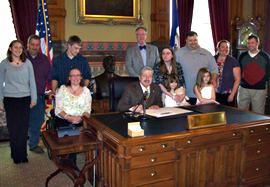 Bill signing in the Governor's office.

Four Iowa families who’ve had a stillborn baby gathered in the governor’s office Monday afternoon to witness the signing of a law that will let them get a state-issued birth certificate for their baby.

“I already posted on Facebook first thing today that it was bill-signing day and that our son, Wyatt, was getting a birth certificate,” Sarah Coleman said.

Her husband, David, has been at the statehouse this year to lobby legislators to change state policy which issued only a death certificate in cases of stillbirth.

Jennifer Correll of North Liberty will ask the state for a birth certificate for her son.

Correll soon connected on-line with two women who were lobbying legislators to pass a law granting both death and birth certificates for stillborns.

“I’m a big researcher and so I started digging and digging and found them on Facebook,” Correll said. “…I’ve been talking with them pretty much since October.”

Mandy Ford of Clarinda gave birth to a stillborn baby last August. She immediately began lobbying for this law after talking with another woman who’s been trying to legislators to make this change for over a decade.

Governor Branstad spoke to the families Monday afternoon. “It’s a testament that this passed without a dissenting vote. It passed unanimously in both houses,” Branstad said. “And it will give comfort to approximately 200 families who are faced with stillbirths each year here in the state of Iowa.”

Even with advances in medical technology, about one out of every 150 pregnancies ends in stillbirth.