You are here: Home / Military / Iowa unit faces lots of threats while deployed in Afghanistan 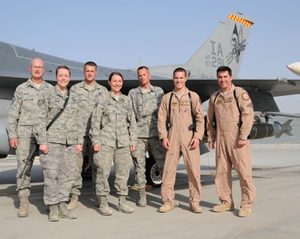 Members of the 124th Fighter Squadron in Afghanistan.

The Iowa Air National Guard soldiers who are on active duty right now in Afghanistan face threats on the ground and in the air as they provide air support for coalition forces 24-hours-a-day.

One threat the 124th Fighter Squadron’s commander says they are not focused on is the plan in Washington to phase out their Des Moines-based 132nd Fighter Wing.

Lieutenant Colonel Travis Acheson of West Des Moines, says they can’t afford to take their eyes off of the military threats. “We’re trying not to get wrapped up in what’s going on back home, that’s part of the leadership’s role here, I deal with it daily,” according to Acheson.

“We have a lot of smart people here asking a lot of smart questions as most people would back home. The big thing is focus, finish the mission, finish strong, hug our families, shake a lot of hands and then we’ll deal with that back there.” 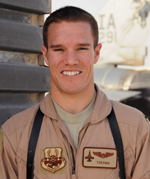 First Lieutenant, Ryan Stott of Jefferson, is an F-16 pilot who says there are various thing they face while in the air. “For us, there is a certain threat from the enemy…they do have shouldered fired weapons and they have the small arms, but probably the biggest threat for us right now is it’s just a very crowded airspace. Lots of other platforms are out here, there’s lots of air power, there’s a lot of things going on,” Stott explains.

And he says the terrain in Afghanistan is a lot different than flying across Iowa. “There’s mountains that go up to 18 to 20,000 feet, so there’s times when you are out there flying at night in the weather, mountains are up 20-thousand feet so you really got to have what we call situation awareness about what’s around you as far as terrain and other aircraft, so those are probably the biggest threats to us,” Stott says.

Lieutenant Colonel Acheson says the weapons of the enemy are much less a threat than the crowded airspace as the enemy often takes cover upon hearing the roar of the F-16 coming in. “I can tell you we’ve had some Iowa pilots get fired upon while they’re doing a show of force,” Acheson says. “The neat thing about that is, understand, when the bad guys are trying to take a shot at an F-16 going about 600 miles-an-hour — they’d better be leading the jet by about a mile-and-a-half for those munitions to even come close. So really, we do not fear that at all, the odds of that happening are zero.”

Major Trenton Twedt of Roland, commands the personnel on the ground who keep the jets running, and says the natural terrain at the Kanduhar base is a bigger threat than the enemy weapons. “This base was not used to having F-16’s, and if you know anything about an F-16, it’s got a big mouth on the front and it has a lot of ability to pull things off the ground, which we do not like to go through the engine,” Twedt says.

“You can damage engines very quickly by picking up pieces of rock or what we call foreign object debris and damage a four-and-a-half million dollar engine, and that’s not a good thing.” He says they did have to work on the engine of one jet after it sucked a garbage bag into it. Twedt says there are tumbleweeds, garbage and lots of dust are always floating around.

“Imagine somebody just taking a big 50-gallon drum of talcum powder and dumping into your room in your house with the A-C on and the heat on and blowing it around, it settles everywhere. And then with construction going on, with gravel roads, not paved roads, everything gets drug onto the hard surfaces where the aircraft are operating,” Twedt says.

“So, three, four, five times a day we’re out literally scanning, a hundred people are out walking on the flight line, picking up rocks, pulling special sweepers.” Major Twedt says there’s also a large amount of traffic around the base which includes lots of people who don’t realize the danger of tracking debris onto the flight line. He says they have to keep watch to keep people out of the area.

The soldiers spoke with reporters this week on a conference call from Afghanistan. There are some 300 Iowa Air Guard members on the mission, and they will return later this spring.

NOTE: This is the second in a series of stories on the Iowa Air Guard soldiers on deployment in Afghanistan.