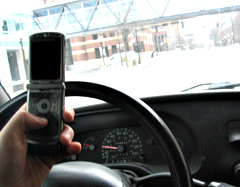 Law enforcement officers in Iowa and around the country are trying to get motorists to focus on driving, rather than their cell phone.

Sergeant Scott Bright, with the Iowa State Patrol, says far too many crashes are happening on Iowa’s roads because people are texting while driving.

“It seems like society is in such a big hurry this day and age. People are trying to catch up with their emails or texting while they’re going down the interstate,” Bright says. “That’s a distracted driver and that’s how the collisions are occurring out there.”

The National Highway Traffic Safety Association has designated April as National Distracted Driving Awareness Month. Despite a law that bans texting while driving, Bright says several people are killed in Iowa every year because of a distracted driver.

“We lose approximately 10 people a year based on a distracted driver out – whether it’s texting on a phone, eating, people reading magazines and people just not paying attention to their driving,” Bright says. Nationwide, nearly 6,000 people are killed every year and a half million more are injured in distracted driving traffic crashes.

A report from the National Safety Council found one out of every four traffic crashes is caused by people talking on cell phones or sending text messages. “We try to educate the public that the number one goal and task at hand when somebody gets behind the wheel is to focus on driving. That’s what they should be focused on, not their cell phone and what’s going on in their car,” Bright says.