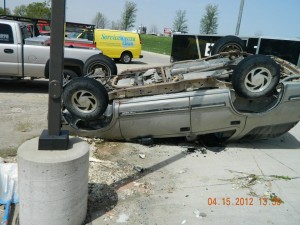 A car flipped by at tornado near Creston's hospital

Forecasters used some unusually strong words and phrases to warn Iowans and others in the Midwest about the potential for severe weather this past weekend.

“In my career, that’s pretty unprecedented to go with a day two ‘high risk,’ which is a significant outlook,” Johnson said. A warning that a “tornado outbreak” was “likely” was issued on Friday.

On Saturday, at least five tornadoes touched down in Iowa – including a couple of EF2 twisters that caused extensive damage in Creston and Thurman in the southwest section of the state. Smaller tornadoes were reported close to Council Bluffs, near the Oskaloosa airport and near New Virginia in south-central Iowa.

Johnson said forecasters are trying to encourage people to take weather warnings seriously. “We’ve had, unfortunately, a lot of bad tornadoes across the United States in the last two years. Some of the findings from our assessments after these storms has been that people are often too optimistic if they’re in the path of the serious storm – thinking the storm is going to hit somebody else,” Johnson said.

“Our purpose with all of this is to try to get people to heed the warnings and take cover.” Despite the warnings, many residents of Creston were surprised by the severity of the storm that swept through their town. The twister dropped down so fast that it went undetected on radar and officials were not able to sound tornado sirens.

Johnson said the “rain-wrapped” tornado wasn’t spotted until his office started hearing damage reports. “We had an amateur radio spotter in that area who reported hail at about the time of the tornado. They didn’t mention the tornado because they couldn’t see it,” Johnson said.

“Coupled with that, the evidence of (a tornado) on radar was equally weak. It’s one of those cases where it was unfortunate, but that does happen occasionally in this type of an event.” Six people were injured in the Creston tornado, one of them critically. There were no serious injuries in the tiny town of Thurman, although that EF2 twister destroyed at least 14 homes while causing serious damage to 28 other homes.