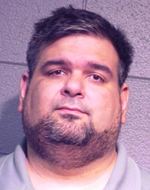 A Des Moines man accused of sexually abusing three of his children was captured by U.S. Marshals in Chicago this morning. Des Moines Police on Monday said a nationwide search for 36-year-old James Beaudrie  was underway.

Mike Powell, a Deputy U.S. Marshal in Des Moines, says Beaudrie was tracked down at his mother’s home in Chicago. Marshals entered the apartment today at 7 a.m.

“Shortly before marshals and task force officers made entry, Mr. Beaudrie fled out the rear door of the apartment,” Powell said. “After a short search, he was located attempted to hide under a stairwell of the apartment complex.”

Beaudrie’s van was found abandoned last Friday in Salt Lake City, Utah. It’s not clear how he made his way to Chicago. Beaudrie and his wife have nine children. Thirty-five-year-old Kijua Beaudrie was arrested Monday and charged with three counts of child neglect. The children, who range in age between a few months old to 16, are now in foster homes or shelters.

Police said the Beaudries had been living in a store at Merle Hay Mall and occasionally staying in a hotel. James Beaudrie ran a toy and game shop in the mall.