You are here: Home / News / Camera chronicles the life of Davenport falcons 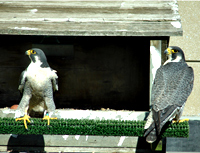 Bird lovers anywhere in the world can now keep close tabs on a peregrine falcon nest perched outside a tenth-floor window near the top of an eastern Iowa building.

A bald eagle-cam in Decorah became an Internet sensation last year, drawing millions of viewers via the Internet, so MidAmerican Energy spokeswoman Tina Potthoff says the utility has upgraded its falcon-cam at the company’s Davenport office.

“In the past, we’ve only been able to provide still images that have been updated on a regular basis,” Potthoff says.

“We’re happy to be able to provide streaming, live video where you can actually see the birds and check out what they’re doing at any time of the day. There are four eggs in the nest and we expect those to hatch in the next week or so.”

While some birds prefer more secluded areas to raise their young, the falcons have been nesting on the side of the MidAmerican building near the Mississippi River year after year. “There was some bridge construction that forced a pair of peregrine falcons from their original home on Centennial Bridge in Davenport many years ago,” Potthoff says.

“We worked with the Iowa Department of Natural Resources to put a nesting box just outside our window at MidAmerican Energy’s facility in Davenport and those falcons made a home there.” Both of the parent falcons have numbered bands on their legs which were used to track and identify them.

“Scorpio was actually released at Ball State University in Indiana as part of a wildlife recovery program and we have another bird, ‘P/D,’ who was released in (Lansing) Iowa as part of a program to reintroduce these birds back into the state,” Potthoff says. “They’ve been together and since 2003, they’ve raised more than a dozen young outside of our 10th floor window in Davenport.”

After the eggs hatch, each falcon will be banded by experts from the Iowa D.N.R. so their progress can be monitored as they grow.

See the birds yourself at: www.wqad.com/falcon-cam