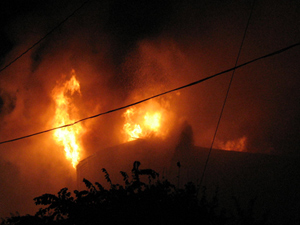 A large house that had been a mortuary for decades in southwest Iowa was heavily damaged by fire early this morning.

The former Hockenberry-Mullen Funeral Home in Atlantic was vacant but investigators say there may’ve been people inside, either youth or vagrants.

Atlantic Fire Chief Mark McNees says it was a challenging blaze to fight. “The top story was fully engulfed when we got here,” Chief McNees says.

“We got it under control, got it knocked down. Difficult to access. We’re not sending anybody in. We’ve got a lot of bowed walls with the roof collapsed. Getting it totally out and under control will take us a while.” As yet, fire crews have not been able to gain entry to the sprawling two-story structure.

“I have absolutely no idea what may’ve caused this,” McNees says. “Rumor is, people have been in and out of here off and on, maybe staying in here but that’s undetermined. I don’t know what’s going to be left.” 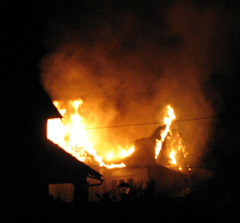 The call was dispatched shortly after 3 A.M. Witnesses say the flames started on the upper floor in an area that served as an apartment above the garage. The flames quickly engulfed the upper floor as embers and thick smoke filled the air.

Firefighters doused a house across the street with water to prevent that structure from catching fire. A neighbor who lives nearly a block to the north said she could see embers flying by her house.