You are here: Home / Fires/Accidents/Disasters / Missouri River flows expected to be normal 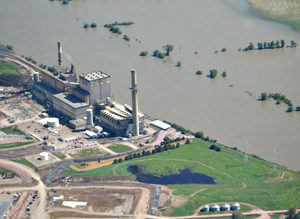 After record run-off and flooding on the Missouri River last year, it appears river flows this year will be below-normal.

Jody Farhat is chief of the Missouri River Basin Water Management Office for the U.S. Army Corps of Engineers in Omaha.

Farhat says their predictions will be welcome news to those who had flood damage last year.

“This is based on the lack of Plains snowpack, the lower-than-average mountain snowpack and the unusually warm and dry conditions we’ve had so far this year.”

Farhat says the Corps will be able to maintain normal flows on the river until at least July first. “We’re currently providing full-service navigation flow support,” she says. “If the total system storage falls below 57-million acre feet on July first, flow support will be reduced for the second half of the navigation season.”

Farhat says some normal signs of life are also returning to the river, including two types of endangered birds. “To date, 51 piping plover nests have been located, with the highest number of nests on Lewis & Clark Lake and on the river reach below Gavins Point Dam,” she says.