You are here: Home / Fires/Accidents/Disasters / Iowa’s Peace Officer Memorial to be moved 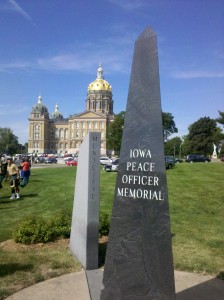 A large, stone monument dedicated to fallen Iowa law enforcement officers will soon have a new home. The Peace Officer’s Memorial monument, currently located just east of the State Capitol in Des Moines, will be moved later this year.

Governor Terry Branstad spoke at the annual Peace Officer’s Memorial ceremony earlier this month. “Behind me stands the Peace Officer Memorial monument and I go back long enough that I was here when it was built,” Branstad said. “Next year, it will have a new home, a new location on our capitol campus.” The memorial was erected in 1985.

Larry Noble, the Commissioner of the Iowa Department of Public Safety, said work is underway to move the memorial south and west of the Capitol – to a location just outside of his agency’s headquarters. “This stately, stone memorial will soon have a new home,” Noble said at the ceremony.

This year, the names of two men were added to a list of 166 Iowa law officers who have died in the line of duty. Des Moines Police Officer Roger Hildreth and State Trooper Mark Toney had their names added to a memorial plaque. The families of Hildreth and Toney attended the Peace Officer Memorial ceremony on May 18.

Noble said next year’s ceremony will be held at the new location near the Department of Public Safety building. “Our sincere hope is that when visitors, loved ones and officers from across Iowa visit or conduct business on the capitol complex or at the Department of Public Safety, they will more easily be able to pay their respects to the monument and to their loved ones,” Noble said.

Officer Hildreth suffered a fatal heart attack while running on a treadmill in the Des Moines Police Department’s gym. Trooper Toney was killed last September when his patrol car left a roadway south of Indianola, rolled several times and burst into flames.