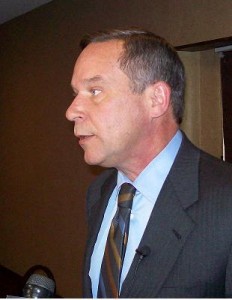 “This commission, even before I got here, had said, ‘We want to move to a land-based facility,'” Lamberti said this morning during an interview. “We gave them sufficient time and the best benefit to the State of Iowa is to have a land-based casino in Woodbury County — from the revenue, from the competition in terms of what we have there, the market — and we’ve made the decision we’re going to move forward.”

Lamberti said the commission gave the current casino operators nearly a year to negotiate a new development plan with Missouri River Historic Development, the non-profit that holds the casino license, and now it’s time to open up the prospect that others may build in Sioux City.

“You know, not every market in Iowa can necessarily go land-based,” Lamberti told reporters. “But we think that is a market that needs to go land-based.”

The Racing and Gaming Commission voted to extend the current operating license for Sioux City’s riverboat casino through March 31st of 2013, as it was set to expire July 7, 2012. Penn National Gaming currently operates the riverboat in Sioux City.

“Our first priority is obviously to keep it open and operating and so that’s why we’ll consider the extension the commission offered us today,” Karen Bailey, a spokeswoman for Penn National Gaming, told reporters this morning.

But Penn National Gaming had asked the commission to let it establish an operating agreement with a new non-profit rather than keep its relationship with Missouri River Historic Development, as that group is suing Penn in a long-running dispute between the two organizations about the scope of a new land-based casino in Sioux City. It’s unclear whether the two warring sides can agree to keep operating the casino through March 31.

“The commission gave us their option and their preference,” Bailey told reporters this morning, “and so the first priority is to continue the operations of the boat and to continue the employment of our 325 employees.”

“I think it’ll be fine,” Monson said. “We still have a contract.”

Monson described today’s commission action as another “bump in the road” as he and others seek a casino based in downtown Sioux City — and Missouri River Historic Development is now seeking another partner for that project, preferably the operator of another Iowa-based casino.

“We have hung in with Penn for a long time,” Monson told reporters. “We’ve never tried to go around ’em or under ’em or over ’em, but that’s no longer part of the game.”

The spokeswoman for Penn National Gaming said her company is likely to submit an application to state regulators to be the operators of a new, land-based casino in Sioux City.

“I think we’ve made that very clear,” Bailey told reporters. “We’ve always had the intent to go land-based. We’ve already presented the proposals, a $100 million facility, and so that continues to be a priority for us, especially if we continue to be the operator in Sioux City.”

Another executive with Penn National Gaming told state regulators this morning that without dismissal of the lawsuit from Missouri River Historic Development that’s “hanging over our heads,” the two “can’t have a partnership” and keep operating the Sioux City riverboat casino.

AUDIO of discussion during commission meeting.